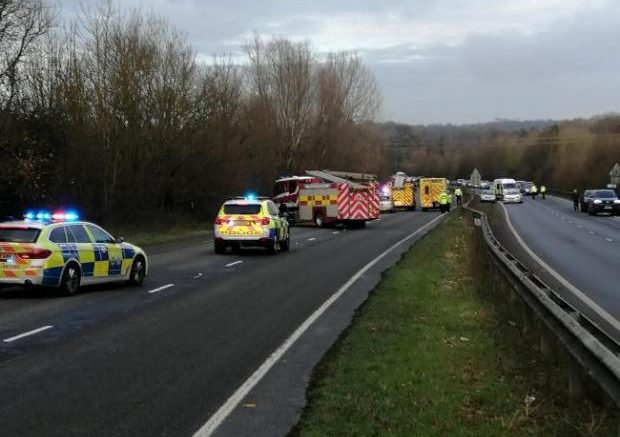 THE family of a man who died in a crash have paid tribute to their “kind-hearted” son.

Callum Chapman, 24, from Southwater, was a passenger in a car which crashed on the A24 on Sunday.

Two men arrested on suspicion of causing death by dangerous driving after the collision near Southwater have been bailed.

His mother, Jillie Slope, said Callum’s family were “truly humbled” by the outpouring of love for him.

She said: “Callum struggled with mental health in the last four years and together with his ADHD diagnosis and autism he was very misunderstood.

“The two weeks before his death his life had just started to turn a corner – he had been working with a close friend on a few jobs and he was then offered a full-time position.

“He was amazingly happy that someone had faith and trust in him. His recent car purchase brought so much joy to him, he was seeing all his friends and starting to enjoy his life again.

“He loved metal detecting with one of his close friends. He was so passionate about it and had many interesting and rare old finds, getting him on the front of a detecting magazine and messages from detecting groups. He loved history and would love enriching our lives with historical facts, places and buildings we passed or visited.

Police, ambulance and fire crews rushed to the scene at 1.25pm to reports of a Lexus car crashing into a tree.

Emergency services at the A24 crash

It was confirmed that 24-year-old Callum died in the collision.

Speaking about her son, Jillie said: “Cars have always been a massive interest from being small. He started with motorbikes, riding with his close friends and eventually getting a car. He would love going to shows, Goodwood, drive-bys and obviously being a passenger in supercars like Ferraris, McLarens.

“He was an official photographer for Sussex Ferrari during the 2016 Horsham Piazza Italia and thoroughly enjoyed going to all of them.  He used to spend lots of Saturdays and Sundays with close friends up in London supercar spotting until eventually, his mental health declined.

“Callum was a kind-hearted, polite, emotional, honest, friendly young man who helped so many of his peers at school when they were being bullied, even if he didn’t know them. He didn’t enjoy school at all as he struggled to interact with teachers and they to him.

“He always loved animals from spiders, guinea pigs, hamsters to reptiles, fish and dogs but had a special place in his heart for cows – he had a real connection with them. He was always asking me for a pet black cow.

“His sister Madi Chapman, step-sister Kerrie Slope, step-dad Jason Slope and I are blown away by the messages, cards and Facebook posts from people whose lives he had touched – even in the smallest way.

“Tributes saying he was inspirational, kind-hearted, polite, helpful and unique. The lasting impression being his humour and his amazing laugh.  He always brought light into a room with that humour and laugh.

“Callum never believed he was well-liked, only by those closest to him, but he would be totally amazed at the outpouring of love for him. We are all so unbelievably proud of him.

“He left us doing something he loved – being in a car. I know he is causing havoc wherever he is now.

“We are all totally devastated at a bright shining beacon being put out too soon. All of his family and closest friends would like to thank each and everyone who has messaged. We are truly humbled.”

A 20-year-old man who was also arrested has been released without charge.

Anyone with information is asked to report online or call 101, quoting Operation Hampstead.