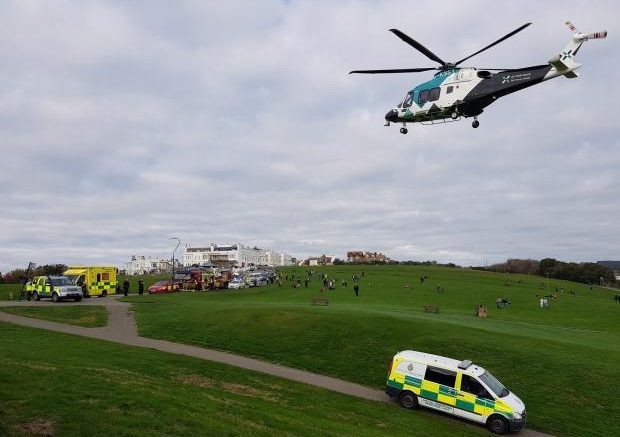 A YOUNG boy was airlifted to hospital after falling down a cliff.

Emergency teams worked together to rescue the child after he plummeted more than 20 metres while climbing West Hill Cliff near Hastings this afternoon.

Police, fire ambulance and air ambulance crews were called at about 2am and quickly filled the cliff-top road.

The boy was transferred to hospital in the air ambulance shortly before 3pm.

An East Sussex Fire and Rescue Service spokeswoman said: “We were called at 2.01pm to assist the South East Coast Ambulance Service (SECAmb) with an incident in Castle Hill Road, Hastings.

“Crews from Bohemia Road attended. We left the scene at 2.55pm.”

Rother Police took to social media to praise the work of both emergency crews and passers-by who had helped them with the rescue.

A Twitter post read: “Collaborative working with our partners and communities to help rescue a young lad who fell more than 20 metres while climbing West Hill Cliff.

“(Wishing a) speedy recovery to you, and thanks to the Kent Surrey Sussex Air Ambulance, SECAmb and East Sussex Fire and Rescue Service.”

A MOTHER and her 11-week-old baby were forced to make an early-morning evacuation after a fire in her neighbour’s house which contained cannabis plants. The Argus | Brighton and Hove news …

John Simm has been spotted filming a scene for a new ITV drama series on Hove seafront. The Argus | Brighton and Hove news …

An Italian chef has been jailed for life over a savage murder where his victim left handprints in his own blood as he tried to pull himself to safety only to dragged to his death. The Argus | Brighton and Hove news …

POLICE have made a fresh appeal for witnesses after two men attacked a teenage boy and then made one of his friends hit him repeatedly. The Argus | Brighton and Hove news …