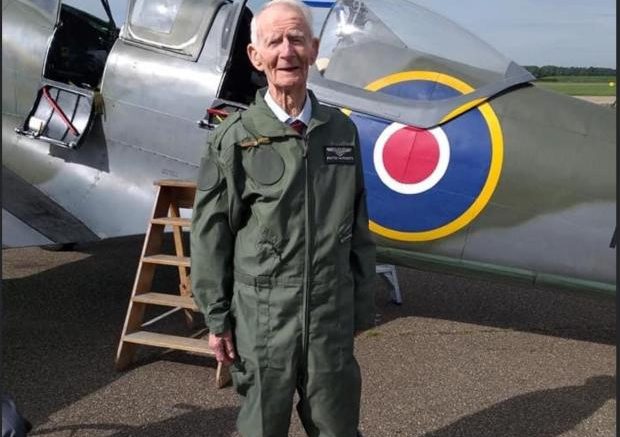 GENERATIONS of paratroopers gathered to pay their respects at a 94-year-old D-Day hero’s funeral.

Frederick Glover, known as Fred, was laid to rest at the Downs Crematorium under a guard of honour from soldiers of the Parachute Regiment.

The war hero died on October 31 after he was taken to hospital following a fall at home.

The ex-paratrooper, from Woodingdean, contracted a chest infection which was later diagnosed as Covid-19.

The 94-year-old veteran was due to be honoured by the French next year with a street in Normandy named after him.

Former paratrooper Doug Moodie paid tribute to the war hero and said he had a “zest for life”.

He said: “Fred was a great light. He was in the same battalion as my father during the war.

“He had a zest for life and doing things properly. He was well known for saying he would do it all again if he had to.

“It is a huge loss. I am sure the family will be felling it. These guys are supposed to be invincible, they went all that for us and this sort of thing isn’t supposed to happen.

“It is a day we all know is going to come but it is never good when it happens.”

Among the mourners was the Parachute Regiment pony mascot Pegasus who led the procession to the crematorium.

Paratroopers lined the road as the hero’s body was driven into the courtyard.

Men from current Paratrooper regiments, dressed in military uniform, marched the coffin into the Downs Crematorium, where the service began.

A memorial including a stunning bouquet of flowers, medals and Fred’s pink beret were left for mourners to pay their respects.

On D-Day, Fred and the rest of 9 Battalion were charged to assault and silence the guns of a battery near the French village of Merville, to the east of the beaches.

Once across the Channel, fire from a German 20mm gun hit the glider’s fuselage and several men were hit. Fred was wounded in both legs.

He was later captured and taken as a prisoner of war to Hopital de la Pitié-Salpêtrière in Paris.

He escaped from the hospital after news reached him that the allies were near.

After the war, Fred worked at CVA Engineering in Haywards Heath. The firm became The Worcester Valve Company and Fred was works manager.