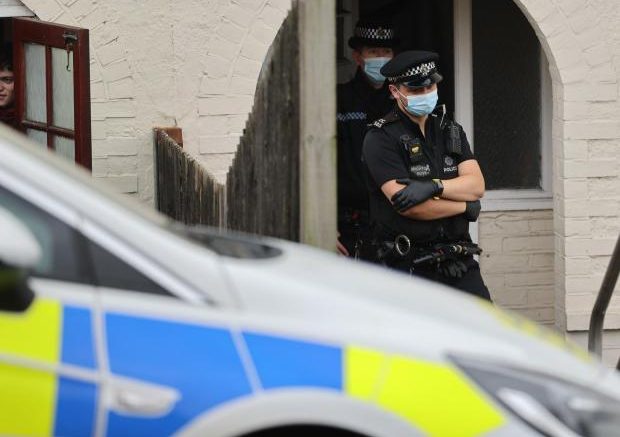 A MOTHER and her 11-week-old baby were forced to make an early-morning evacuation after a fire in her neighbour’s house which contained cannabis plants.

Michelle Oakwell, 43, was woken by her worried partner after smoke engulfed their home in Shelldale Road, Portslade, in the early hours of this morning.

The family awoke in darkness and without power and believed the fire may have been in their property.

However, the smoke was coming from the attached house next door, where firefighters later found a number of cannabis plants.

Ms Oakwell, who rushed out of the property with her 11-week-old baby, said: “My partner woke up to the smoke – we’ve had new fire alarms installed and they did not go off.

“We thought the fire might have been inside our house and it was pitch black.

“My son and his friends were downstairs so we went and got them up.

“We have smelt weed next door before as it smelt like someone had been smoking it, but we didn’t smell anything today- just smoke.

“It was scary and we are really tired.”

Her partner Chris Oakwell, 32, who has been living in the area for about four years, said: “I woke up to the house full of smoke – it was black.

“I came out and called the fire brigade.

“This was really early in the morning – I just want to go back to sleep.”

One resident, who asked not to be named, said there is a power line underneath several properties in the road  – including theirs – near its junction with Trafalgar Road.

The line is said to run underneath the house containing the cannabis plants and the resident claims they have smelt “overheating” on occasions before this morning’s fire.

The resident also said a cannabis smell had been coming from the property for some time.

Some houses near the house fire were without power until the afternoon while crews attempted to fix the issue.

The firefighters’ cannabis discovery has prompted Sussex Police to begin an investigation.

A spokesman for the force said: “Detectives are currently waiting for electricity supplies to made safe before they can commence an examination of the property.

“Nobody is reported to have been in the house at the time and there are no reports of any injuries.”

Claire Brown, 37, who lives with her four children between the ages of five and 13, was one of the residents affected by the smoke and power outages.

She said: “I woke up and there were three fire trucks outside and foam all over the floor.

“The smoke was coming down the street and there was foam in my garden.

“Since we found out the smoke was toxic, we haven’t opened anything in the house.

“I have four kids and two of them are disabled.

“There’s no power and we can’t cook, so we’ve had to order a takeaway.

“It was quite scary when you wake up and there is no light.

“It’s a quiet street and you don’t expect anything like this to happen.

“My little boy has found it entertaining though, he loves police officers and firemen.”

Anyone with information about the property is asked to report online or call 101 quoting serial 233 of 24/10.

These are the best deals and bargains available during the Black Friday sales event. The Argus | Brighton and Hove news …