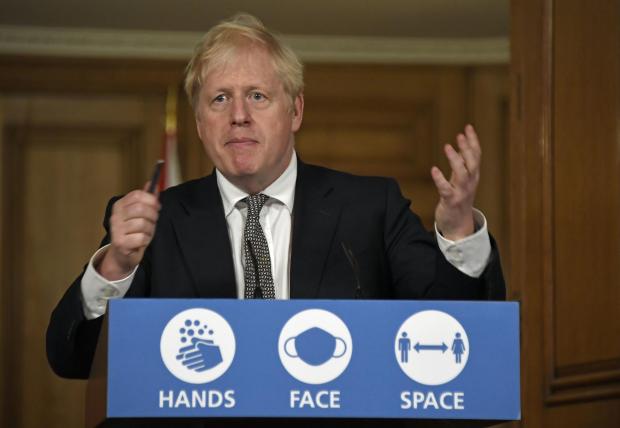 PARTS of Sussex have been put into Tier 4 restrictions with a “stay at home” message by law.

This followed Boris Johnson holding emergency talks with Cabinet ministers as scientists confirmed that the new variant coronavirus was spreading more rapidly in the South East and London.

At a press conference this afternoon, the Prime Minister announced all areas in the South East and London currently in Tier 3, will be placed into Tier 4.

Those in Tier 4, such as Hastings and Rother, must not mix with other households on Christmas day. They will also return to measures similar to the first March 23 lockdown.

The rules will come into force tomorrow.

The Tier 4 measures will see all non-essential shops, gyms, and hairdressers close.

People are ordered to stay home apart from limited exceptions such as work – if people cannot work from home – education, childcare and exercise.

However, he said, “Christmas cannot continue as planned for other areas”.

Rules have been changed across the UK with Christmas bubbles only allowed on Christmas day itself.

The move comes amid reports that the Prime Minister could order new travel restrictions for South East England in an attempt to stop it spreading to the rest of the country.

The chief medical officer for England Professor Chris Whitty said the UK had now informed the World Health Organisation that it had concluded the mutant strain could spread more quickly.

“As announced on Monday, the UK has identified a new variant of Covid-19 through Public Health England’s genomic surveillance,” he said in a statement.

“As a result of the rapid spread of the new variant, preliminary modelling data and rapidly rising incidence rates in the South East, the New and Emerging Respiratory Virus Threats Advisory Group (NERVTAG) now consider that the new strain can spread more quickly.

“We have alerted the World Health Organisation and are continuing to analyse the available data to improve our understanding.

“There is no current evidence to suggest the new strain causes a higher mortality rate or that it affects vaccines and treatments although urgent work is under way to confirm this.

“Given this latest development it is now more vital than ever that the public continue to take action in their area to reduce transmission.”

It is the second meeting in less than 24 hours that the Prime Minister has held on the issue – underlining the strength of concerns around the new variant.

Former health secretary Jeremy Hunt warned the situation was on a “knife-edge” with infections rising and hospital admissions on the increase.

The latest development comes after Mr Johnson refused to rule out a third national lockdown for England – a move he has previously been deeply reluctant to contemplate.

Wales and Northern Ireland have already announced fresh lockdowns once Christmas is over while the Scottish Government has said the option “remains on the table”.

Much of the the latest focus is on the South and East of England where the new variant is thought to be most prevalent.

On Friday, the NHS in Kent announced it was suspending non-urgent hospital procedures, saying it was treating double the number of patients it had at the peak of the first wave in April.

Latest figures from the Government’s Scientific Advisory Group for Emergencies (Sage) showed the R number for the UK was estimated to have risen to between 1.1 and 1.2 – which means the disease is growing again.

At the same time, there are concerns about a possible upward spike in cases as rules on households mixing are relaxed over the Christmas period.

Mr Hunt, who now chairs the Commons Health and Social Care Committee, said that if the Prime Minister did not want to change the regulations, he should at least consider issuing stricter guidance.

He said the prospects of a new year lockdown in England were on a “knife-edge”.

“It is a very difficult, finely-balanced judgment. The biggest worry is what happens indoor in family gatherings and that’s where the risks do increase,” he told the BBC Radio 4 programme.

“I think they can be clearer about what is and isn’t advisable because it would be an enormous tragedy if we had a spike in deaths at the end of January/February because we took our foot off the pedal this close to having a vaccine.”

Saturday’s talks came as large parts of the South East were following London and large parts of Essex and Hertfordshire, which entered the toughest Tier 3 restrictions earlier this week.

The latest tiering changes in England – which came into force on Saturday morning at one minute past midnight – mean 38 million people are now living in Tier 3, 68% of the population of England.

Those areas moving into the highest tier are Bedfordshire, Buckinghamshire, Berkshire, Hertfordshire, most of Surrey, Peterborough, Hastings and Rother on the Kent border of East Sussex, and Portsmouth, Gosport and Havant in Hampshire.

Bristol and North Somerset have moved down from Tier 3 to Tier 2 while Herefordshire drops into Tier 1 – even though the county’s public health director raised concerns about the relaxation.