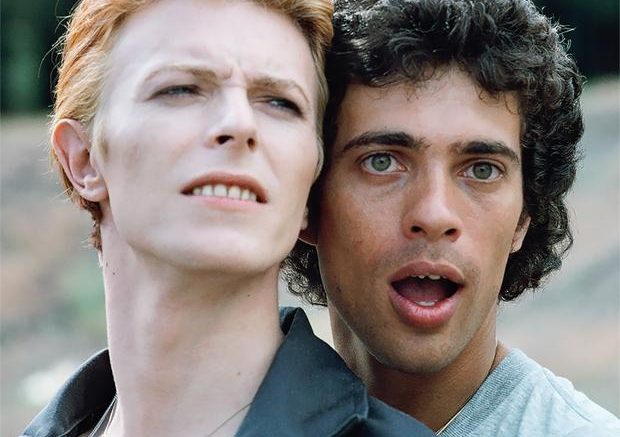 A DAVID BOWIE exhibition opens this weekend including never before seen photos of the musician taken by a childhood friend.

Geoff MacCormack shared his memories of the rock legend with The Argus ahead of the exhibition opening tomorrow.

In 1973, Geoff received a phone call from the star asking him to go on tour as part of The Spiders From Mars.

He did not hesitate to accept and the phone call marked the beginning of a touring partnership that took Bowie and him across the world.

During that time Bowie recorded five studio albums, including Aladdin Sane, the live album David Live and Diamond Dogs, which includes the track Rock n Roll With Me, which was co-written by Geoff.

Bowie and Geoff’s musical story began much earlier when the Ziggy Stardust artist was still known as David Jones.

“We grew up together from primary school,” said Geoff.

“We were in the church choir together and the cub scouts.

“We used to sing to a record by Frankie Lymon and The Teenagers because the lead vocalist was only 12 years old and had a tiny little voice that was perfect for us as nine and ten-year-olds to copy and emulate.”

As well as performing percussion and backing vocals while on tour, Geoff documented the visit, taking dozens of photographs, all of which are now on display at Brighton Museum and Gallery.

From Ziggy Stardust and Britain’s glam rock years, the ground-breaking Diamond Dogs tour across the USA and their obsession with American soul music, to Bowie’s first major film The Man Who Fell To Earth (1975) and his Thin White Duke persona, the exhibition of intimate photographs give a glimpse of a close friendship, travel and life on the road with one of the greatest rock stars of all time.

The showcase includes up to 80 large original framed photographs of Bowie by Geoff as well as 60 shots he took on a Kodak Instamatic camera.

For Geoff, the Kodak snaps, including photos of their time on the Trans Siberian Express, are some of the best in the exhibition.

“The photos in the cabinets are really important,” he said.

“They are just Kodak Instamatic snaps but they work in the same way as how we use phones now.

“I love the fact that the images have such impact but there is so much other information condensed in the cases around the rooms.

“We don’t see photo albums any more and the cases work in a similar way to tell stories and record moments in time.

“Some of the photos are really scrappy but they are so much fun.

“There is a photo of David sleeping, and he didn’t know I took that until 35 years later.

“I kept all these photos in a chest in my mum’s house and then of course my friend became a megastar.”

The UK leg of the tour brought the Heroes singer and his band, including Geoff, to Brighton Dome on May, 23 1973.

“I remember I had my Ziggy costume on and John Hutchinson, the other back-up vocalist, also had his costume on, and we decided we’d like a pint so we went next door to the pub and had a pint,” said Geoff.

“We managed to get a couple of fans in who didn’t have tickets.

“We took them through the stage door, so that was pretty cool.”

Geoff now sells his images around the world and has exhibited in the UK, St Petersburg, Russia, and America.

Martin Pell, a lifelong David Bowie fan and exhibition curator, included some of his own memorabilia in the display.

“The David Bowie records you can see are all mine – I found them in the loft,” said Martin.

“But the exhibition is essentially the story of two friends, one of them just happens to be David Bowie.”

The exhibition is the first major show to be shown in the Royal Pavilion since reopening after lockdown.

Michael Bedingfield, chairman of the Royal Pavilion and Museums Trust said: “Bowie was one of the most influential and captivating artists ever and we know this show will appeal to his many fans of all ages.

“The images offer a rare glimpse into a fascinating time of his life spent with one of his oldest friends.”

The exhibition opens tomorrow and runs until Sunday, June 6, 2021.

Tickets must be purchased in advance and are available on the Royal Pavilion and Museums website.