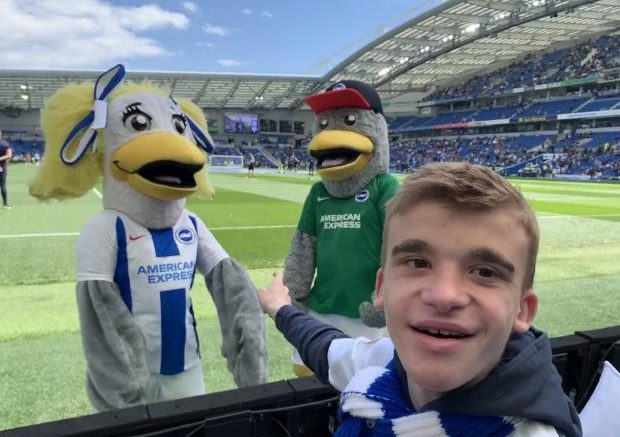 A SONGWRITER has taken on the seemingly impossible challenge of capturing the story of a father and son who might just be Albion’s two most dedicated supporters.

Neil Avery’s track “Some Beautiful Memories” tells the tale of the Mighty Fin and his father Paul, who have repeatedly made the 600-mile round trip from north Wales to the Amex and back to watch their beloved Seagulls.

Fin Williams is a familiar face, and something of a cult figure, among Albion supporters.

When he was very young he was diagnosed with Mowat-Wilson syndrome, a rare genetic condition meaning he is unable to speak.

But that does nothing to stop him connecting with thousands of fans on a daily basis through a Facebook page run by his dad – The Mighty Fin’s I Have No Voice Page.

“The reason I set it up was, when he was quite young, we realised that he was very positive and had this in-built sense of humour which was just very lovable,” Paul said.

You can listen to the full song below:

“I thought, ‘Obviously he can’t talk, but I think I can tell what he would say, and what he would call me’. That’s why I call myself Baldilocks on his page.

“He’s got a little bit of a sneaky sense of humour, so I think he would probably take the mickey out of me as much as he could.”

Paul, or Baldilocks as he has become known, took Fin to his first game four years ago, when Albion faced Villa away while attempting to clinch the Championship title.

“The reason it took me so long to take him is because he had an in-built fear of loud noises,” Paul explained.

“If anybody ever popped a balloon near him or anything like that he would really jump and sometimes get a bid emotional.

“I was always convinced he would love the football, but I was worried about the fact that he wouldn’t be able to handle the noise.”

And Paul’s predictions proved accurate. Fin put his fingers in his ears at first as the enthusiastic Albion away support swelled, but a huge grin soon spread across his face.

“He absolutely loved it,” Paul said.

Fin was able to walk down to the pitch before the game and was given a cuddle by ‘keeper David Stockdale.

The pair had their picture taken and Paul posted it to Fin’s Facebook page along with a couple of other Seagulls social media groups.

Word of the Mighty Fin quickly spread and, within days, his following had soared from 50 to thousands.

“After that first Aston Villa game, I knew I had to take him to as many football matches as possible,” Paul said.

“And, fortunately, because Albion and the Amex have so many spaces for disabled people we were able to get tickets for a lot of home and away games.”

When Fin was diagnosed with Mowat-Wilson syndrome, doctors told Paul and his wife Mel that his life expectancy was likely to be between 15 and 25-years-old.

But the couple still do all they can to make the most of every moment they spend with their son.

“It just made us think, ‘We have got to do everything we can to make him as happy as we can for every day that we can’,” Paul said. “And there is nothing that makes him happier than going to watch Brighton.”

But it is not just the game itself that Fin adores. For a Saturday kick-off, preparation starts at about noon the day before. Nappies, an enema and half-time snacks are packed ahead of time while tickets are double and triple checked – Paul runs a tight ship.

And he needs to, with the family having moved 300 miles from Worthing to Colwyn Bay in 2012 to allow Fin and his brothers and sister to grow up in a quieter environment.

The drive often takes up to seven hours, but it is all part of the experience for the dedicated duo.

“He recognises a few landmarks on the way, but I think the real key moment is when we come over the hill at Coldean and you sweep round on the A27,” Paul said.

“I’ll be saying to him, “Are you ready, are you ready?’. Then, all of a sudden, the Amex comes into view and he starts punching the air and saying, ‘Hoothall’, which is how he says football.

“From that moment on he is just beside himself with joy. I spend half the game just looking at him and soaking it all up. I’ve missed goals before because I was just soaking up his emotion, and those moments are worth their weight in gold. It makes it all worthwhile.”

Though the 600-mile round-trip is undoubtedly a challenge, there was never another option when it came to which club Paul and Fin would follow.

During Paul’s time at Patcham Middle School in the 1980s, he was plucked from a hat and named as one of the mascots as Albion faced Spurs at the Goldstone.

The 51-year-old still has the twopence tossed at the start of the game to decide who would have kick-off, and a photo shows him running out of the tunnel with captain Nobby Horton.

“The world was at my feet that day, and the love story never ended,” Paul said.

Having travelled all that way to see each game, Paul and Fin are the first to celebrate when Albion pick up three points. But, for them, the result is not the most important thing when it comes to matchday.

Paul said: “I remember an away game against Wolves. We didn’t win, but afterwards we saw the players getting back on the coaches. Duffy came up to him, Dunk came up to him, Bruno came up to him. They all came and said hello, and Bruno gave him a big cuddle.

“After that, I’d forgotten what the score was. We have got so many memories.”

And, since first meeting Fin, former Albion captain and current coach Bruno Saltor has made sure to stay in touch.

He said: “Life is about having heroes, heroes to look up and try to imitate their courage, mentality, positivity.

“Fin and his dad are some of my heroes. Nothing can stop them travelling all around this amazing country to watch Albion playing.

“You need people like them next to you to have a happy life.”

Fin’s close relationship with the Albion players has also helped him develop his communication skills.

“I see Fin behave in a different way at the football than I ever see at home,” Paul said.

“When he sees Bruno and says ‘Huno’, suddenly this word comes out of his mouth which I have said to him and you think, ‘woah, this has brought our communication on’.

“He also sang for the first time because of Brighton (Good Old Sussex By The Sea, naturally). Because of the emotion he gets from it, he pushes himself and communicates that little bit better. It’s an amazing thing.

“On the journey home the next day, he’ll be sitting there in the car reading his programme, looking out for pictures of the Amex, and I’ll be reminiscing over everything that has happened over the last 24 hours.

“It’s just a magical experience and I think, without that, our lives would be so much poorer.

“He would not be as happy as he is all the time and I would not have those memories to, one day, look back on with such fondness.

“There’s a huge chance that we’ll outlive him, unless he defies all the odds, and I suspect at that time I’m going to need every single memory of these times.”

It was one of Paul’s Facebook posts about creating “beautiful memories” at the Amex that caught the eye of singer, songwriter and fellow Seagull Neil Avery.

“I had this tune hanging around which was going to be for something else, but I was really moved by Paul and Fin’s page,” he said

“I just thought it was humble, uplifting, grounding. I think Paul had said that we had lost the game, but ‘me and Baldilocks made some beautiful memories’.

“Like a bit of a weirdo, I sent Paul a message out of the blue saying, ‘I hope this is OK, but I’ve written a song about you and your journey’.

“Paul then replied and said ‘mate, me and Mel are in bed blubbing our eyes out, it’s the most beautiful thing anyone has ever done for me’.

“I was so touched and flattered because I didn’t know what would come back. We became friends and it went from there.”

Neil initially hoped the song could be used to raise money to help Paul and Fin continue their intrepid following of Albion. But it is now hoped it can help others experience the same ecstasy that the Mighty Fin feels every time he drives over the hill at Coldean – by collecting funds for the Make-A-Wish Foundation.

“Every time he is at the football, that is Fin’s wish,” Neil said. “He could have tea with the Queen and a helicopter ride, but being at the Amex is his thing.”

“It was always my desire to try and replicate that for other people,” Paul added, saying he and Fin had developed a large group of friends during their time following Albion. Many also have disabilities, and all are Seagulls superfans.

“In my eyes there are so many others who are more deserving.There are some beautiful, beautiful children and disabled supporters at Brighton that have got challenges much worse than Fin.”

The song and a video made by Fin’s former carer Josh Bellis is being released on YouTube today, the day Paul and Fin will make their return to the Amex after eight long months away to watch their beloved Seagulls face Southampton.

Albion captain Lewis Dunk said: “All the players and staff know Fin and his dad, and we know they are massive Albion fans who are regularly at our matches at home and away.

“There is a great bond between Fin, the players and the club, and this song is a celebration of that.

“It is also great timing to see the record out ahead of the return of some fans at Monday night’s game at the Amex.

“Everyone at the club really appreciates the amazing support and patience that Fin, Neil, and all Albion fans have shown over recent months.

“It’s a small step forward and we hope it won’t be too long before we can get back to normal at the Amex, and away matches.”

A Just Giving page has also been launched, with all donations going directly to the Make-A-Wish Foundation – a charity dedicated to granting the wishes of children with life-limiting illnesses.

Click here to visit the Just Giving page and donate to Paul, Fin and Neil’s cause>>>