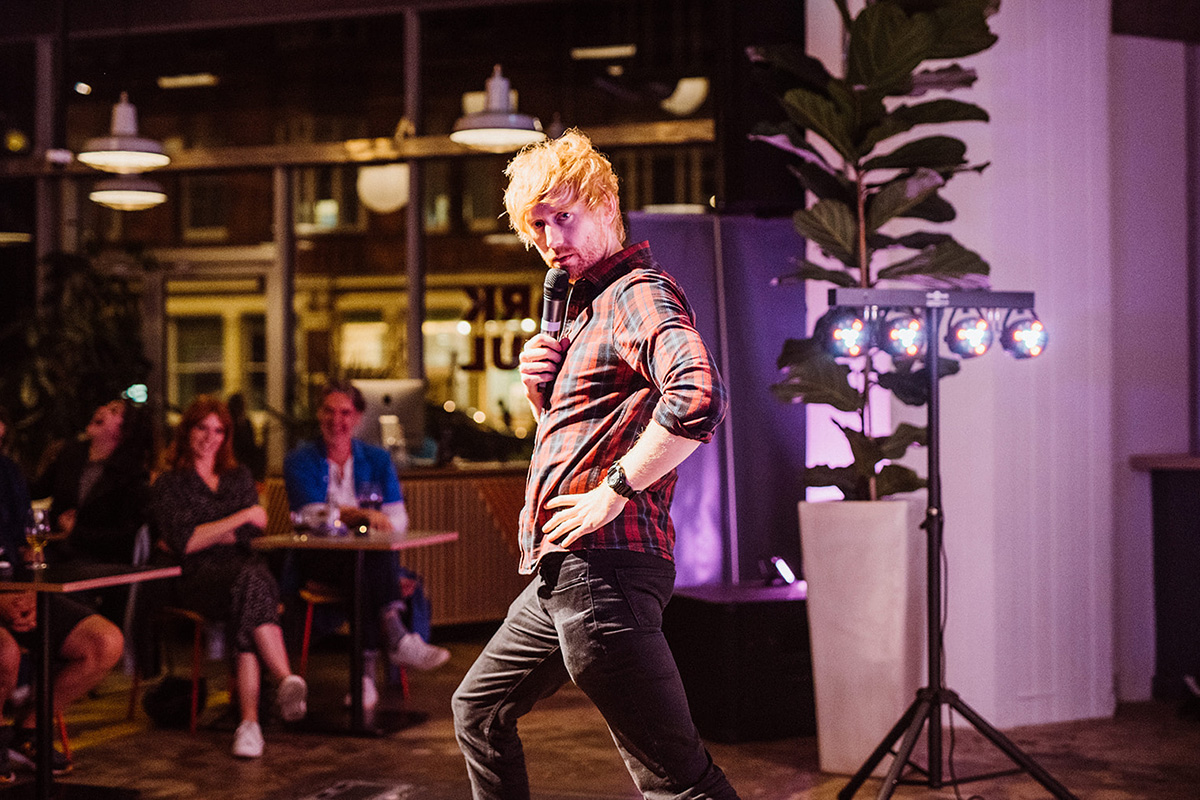 We will be serving Pizzaface Pizzas before 8 PM and in the interval.

Please note, that no entry will be permitted after 8 PM. No food and drink from outside the venue may be brought in.

Huge Davies is a comic musician whose dark humour and wit has gained him a lot of attention on the comedy circuit. Expect a customised wearable keyboard and lyrics that take sharp and twisted turns.

Nominated for the Best Newcomer award at the Edinburgh Festival Fringe for his debut solo show The Carpark and a semi-finalist in the BBC New Comedy Award. Also appearing on Comedy Central Live at the Comedy Store, Roast Battle and as a writer and performer on BBC flagship satirical radio programme The Now Show.

Davies has also acted in BBC Two comedy series The First Team and appeared on celebrity game show Guessable alongside host Sara Pascoe, Alan Davies and Nish Kumar amongst others.

Ania’s sharp, wry writing combined with her warm conversational performance style make her a ‘glittering new talent’ of the UK comedy scene. Her debut hour of comedy won Best New Show at Leicester Comedy Festival 2022, and went on to sell out its entire run at the Edinburgh Fringe and Soho Theatre.

The Times described it as ‘the sort of elegantly amusing, surprising and inspiring debut hour that you come to the Fringe to see’, whilst the Guardian listed it as one of 10 Fringe Shows Not To Miss, saying it ‘will have you crying with laughter’.

She has also already appeared on ITV2’s The Stand Up Sketch Show and Dave’s The Comedy Guide to Life. She will be supporting Ed Gamble on some dates of his tour Electric across the country this autumn.

As a writer, she has written for The Emily Atack Show (ITV2), Frankie Boyle’s New World Order (BBC2), Newsjack (BBC R4), The Now Show (BBC R4) and has contributed regularly to the Have I Got News For You Twitter account.

“The sort of elegantly amusing, surprising and inspiring debut hour that you come to the Fringe to see…she will surely go far” – The Times

Ingrid Dahle is a Norwegian who has made a big impact on the British Comedy Circuit.

After winning Brighton Comedy Festival Squawker Award, she has gone from strength-to-strength being a finalist in numerous comedy competitions such as So You Think Your Funny?, and runner up in the prestigious Leicester Mercury Comedian of the Year.

Loveable and surreal, Ben is a regular on the local Brighton scene – with or without the guitar and costume!

“Ben Carter is naturally funny. Audiences instantly warm to him. You’ll be humming his bonkers tunes for days” – Julie Jepson