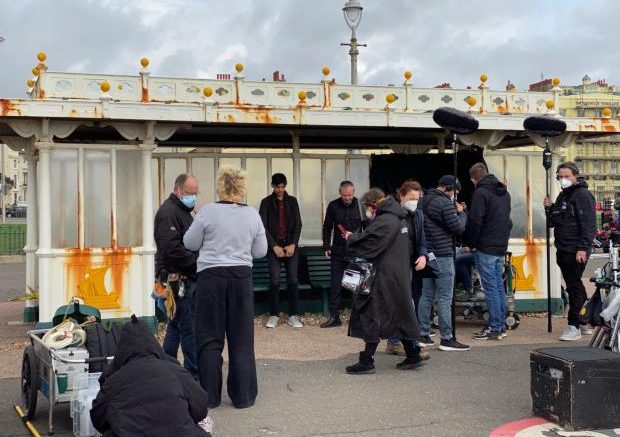 JOHN SIMM has been spotted filming a scene for a new ITV drama series on Hove seafront.

The crew were shooting a scene between John Simm and a co-star in Western Esplanade in Hove.

Written by acclaimed screenwriter Russell Lewis, the drama is being filmed entirely at locations in Sussex.

John Simm, who has the starring role as Detective Roy Grace, could be seen filming a low-key scene, with no extras and a small camera crew.

Meanwhile, filming for the drama was also underway in Ferndale Road, Hove.

A crew gathered on the residential street whilst a scene was filmed inside one of the houses ITV had chosen as a location.

Residents on surrounding streets received a letter through the post informing them of the filming and were asked to park their cars elsewhere.

Sydney Street in the North Laine district in Brighton will also feature in the drama series.

In September, John Simm, who made his name in BBC series Life on Mars, was spotted filming a scene surrounded by a crowd of extras.

Shopkeepers said they were asked to temporarily remove signs about face masks and social distancing, as the drama is not set in the Covid-19 era.

John Simm’s character, Roy Grace, is described as a “hard-working police officer who has given his life to the job”.

Other cast members include Richie Campbell, known for his role in the Netflix series Top Boy and Rakie Ayola from BBC’s Noughts and Crosses.

According to the ITV synopsis, John Simm’s character is “fixated by the disappearance of his beloved wife, Sandy, which haunts his thoughts.

“His unorthodox police methods have come under scrutiny once again and Grace is walking a career tightrope and risks being moved from the job he loves most.”

The drama will be aired in two parts, with each episode lasting for an hour.

There has not yet been any announcement regarding when the series can be expected on our screens, however it is likely to be broadcast in 2021.

These are the best deals and bargains available during the Black Friday sales event. The Argus | Brighton and Hove news …