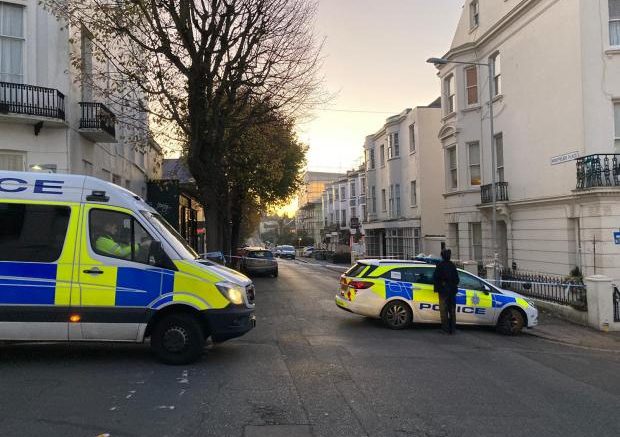 A MAN is in serious condition after a mass brawl late last night.

Police were called to Montpelier Place in Brighton at about 10.15pm following reports of a fight involving about 20 people.

During the incident, a man suffered serious injuries and was taken to the Royal Sussex County Hospital for treatment.

He remains at the site this morning, with police saying he is in a serious condition.

Two men were arrested nearby shortly after the fight, and the pair both remain in custody at this time.

Detective Inspector Owen Radley said: “The victim has suffered serious injuries in the street and has been rushed to hospital.

Forensics are at the scene with police shutting down nearby streets

“The incident happened in what would have been a busy area, and we are sure someone would know what happened.

“We are urging anyone who witnessed the assault to make contact with us immediately.

“There is an increased police presence in the area while enquiries are ongoing.”

This morning, police have shut down the area surrounding the scene of the fight as officers investigate the incident.

Police tape has been stretched across roads leading to Montpelier Place, creating a large cordon around the site.

The entrance to Temple Street from Western Road has been closed

Officers are stationed at nearby junctions to redirect traffic away from the scene, with a large police presence set to remain in the area for some time.

Forensics teams are currently in Montpelier Place, with passersby saying they had seen them taking photos of the crime scene as police gather evidence in an attempt to establish the full circumstances surrounding the fight.

To help with their investigation, Sussex Police are urging anyone who might have seen the fight, or have any information relating to it, to contact them.

Information can be reported online or by calling 101 quoting reference 1484 of 4/11.

Alternatively, people can contact the independent charity CrimeStoppers anonymously on 0800 555 111.

The incident happened on a busy night in Brighton, with hundreds of pub-goers pouring on to the streets as venues in the city closed for the final time ahead of a second national lockdown.

There were huge numbers of revellers in West Street and North Street, just a mile away, shortly after 10pm – the time when hospitality venues were required to close under the government’s coronavirus curfew.

Police dedicated a large number of officers to patrol the city centre following a series of parties and offences on Halloween, a few days before.

Armed units were stationed at the Clock Tower and Brighton Station throughout the night.