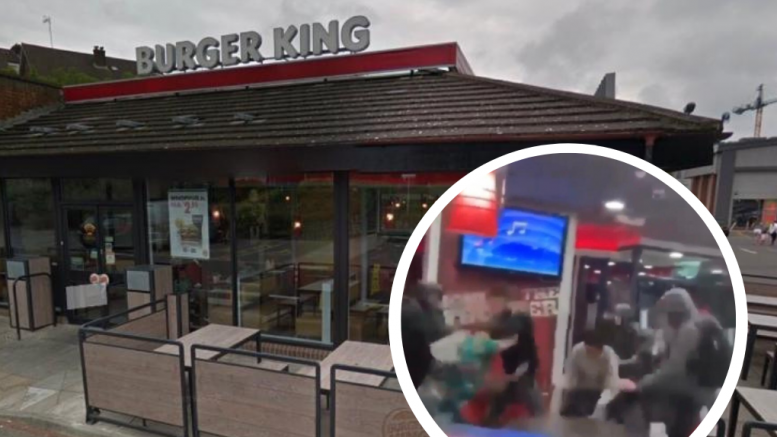 CUSTOMERS watched in horror as a mass brawl erupted at a fast food restaurant.

About 15 teenagers are thought to have been involved in the punch-up and police say one person was allegedly hit with a hammer.

Trouble broke out in Burger King at the Goldstone Retail Park, Old Shoreham Road, Hove, at around 6.30pm on Monday.

Bystanders watched in alarm as fighting spread throughout the restaurant.

In video footage taken inside the branch, young men can be seen punching and kicking each other, knocking over tables and chairs.

A man filming the incident can be heard saying that one was holding a hammer.

Witnesses said the scene was a mass brawl, however the cause remains unknown.

Henry Tomlinson, 25, who lives in The Drive, Hove, said: “I was walking with my partner and noticed a commotion in the Burger King. I saw what looked like a full on, 30-person brawl.

“After watching from outside for a while I saw a group of young men chasing another young man and shouting abuse at him.

“Everyone in the carpark took notice of what was happening and stopped to watch. I think everyone was just very shocked.

“I found the whole situation very unsettling. It certainly wasn’t something I was expecting to see, especially so early in the evening.”

Burger King said it was investigating. A spokesman said yesterday: “The safety of Burger King staff and customers is our number one priority.

“We are aware of an incident that took place at our Old Shoreham Road restaurant last night and we are working with the authorities to conduct a full investigation.

“Burger King UK in no way condones behaviour of this kind in any of its restaurants.”

Sussex Police are also investigating and have appealed for witnesses.

A spokesman said: “Officers were called to a disturbance inside Burger King at Goldstone Retail Park just after 6.30pm on Monday which involved around 15 teenagers. One of the suspects is believed to have been in possession of a hammer and allegedly struck one of the victims with it.

“Police are investigating a number of lines of enquiry to identify those involved. Anyone who witnessed the assault, has any mobile footage or has any information to assist the police investigation should report this online or call 101.”