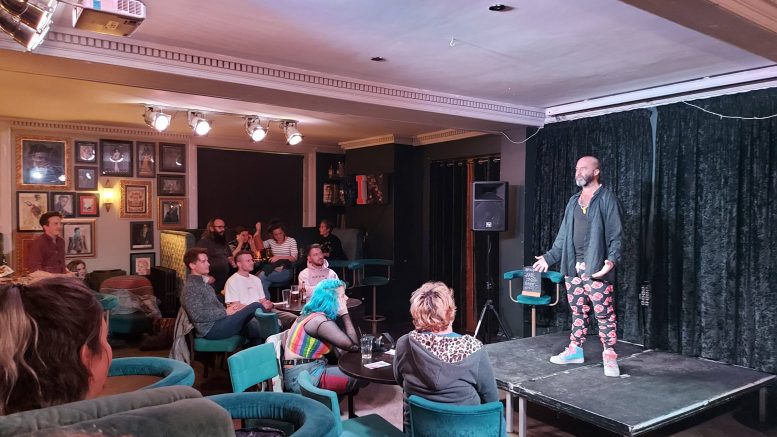 After several smash-hit shows since its post-lockdown revival, Brighton improv night Scoops is back with another brilliant array of comedy acts! Performing monthly at the Grand Central pub, the next show is coming up on Tuesday April 5th – and will be a must-see event!

Scoops features a line-up of four acts showcasing a variety of talent, with previous performances ranging from an improvised documentary about pancakes to a guitar-playing, spirit-possessed agony aunt.

And if that’s not enough improv for you, there’s an open jam at the end where anyone in the audience can jump up and try their hand at Whose Line is it Anyway? style games. Great for anyone who wants to have a go (or simply enjoy a moment in the limelight) in a friendly, inclusive atmosphere.

The upcoming April show features a great line-up, opening with the familiar faces of Ben, Simon & Ric – the much-enjoyed Scoops house act, who always start the show with a bang (and, likely, something incredibly silly)!

Also appearing is long-standing Brighton-based troupe Tea & Toast, last seen in October at Scoops’ re-opening night. They’ll be performing their show The Museum of Relationships, in which improvised romantic stories are inspired by real objects members of the audience still possess from past relationships.

Making their Scoops debut will be musical duo Play it Again. They describe their act as “immortal lounge performers, cursed to provide light entertainment forever!”, using audience suggestions to make up ballads and lounge songs on the spot. Since they’re coming all the way from Nottingham, be sure to catch them while they’re here!

For the fourth act, London-based troupe Plus Support will be returning to Scoops after their last side-splitting appearance in November. They’ll be performing “[Town to be Confirmed]” – an improvised comedy act set in a fictional town.

For a night of fun that’s always different but always leaves the audience smiling, come along to the Grand Central’s beautiful, cabaret-style Nightingale Room for a guaranteed night of laughs! Not even the performers know what will happen!

Tickets £7 at tinyurl.com/scoopsimprov or pay on the door