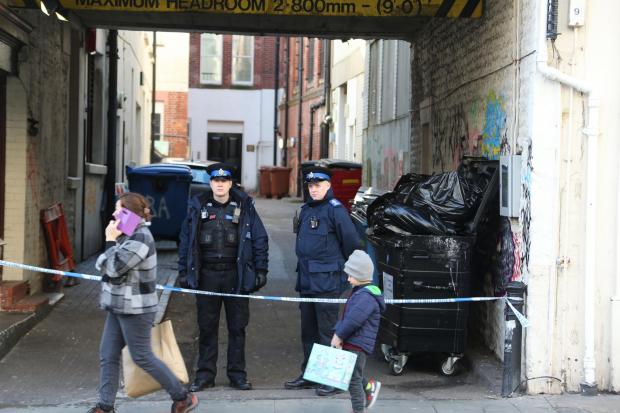 THE HEARTBROKEN family of a murdered young man have made a plea for witnesses to come forward, a year on from his death.

The 24-year-old’s family say they cannot understand why someone would have killed the gentle and kind student from Henfield.

Police launched a murder investigation and closed off the area for several days in the wake of the incident.

Crimestoppers issued a £10,000 reward for information that leads to the arrest and conviction of anyone believed to be responsible.

The scene in North Street, Brighton, where the body of Billy Henham was found on January 2, 2020

Billy had been living at home between periods of studying at Ravensbourne University in London.

But police were called to the disused building society opposite Wetherspoons over reports of concern for a person.

Despite four arrests being made, no one has been charged with Billy’s murder.

Now his family have spoken to the police about how he was “cruelly taken” and have urged any witnesses to come forward and tell the police what they know.

In a statement they said: “Our son Bill was cruelly taken from us a year ago. He was killed for reasons that we cannot fathom.

“He was a kind and peaceful man who would happily talk and listen to those he came across in life. He had been living with us at home between periods of study at Ravensbourne University in London.

Billy Henham, 24, from Henfield, was found dead in Brighton
“We, alongside hundreds of others, gathered to mourn him at his funeral back in February and we all heard his friends talk about their love for him and the good times that they all shared.

“This past year has been hard for many people and we as a family are very grateful for all of the kindness shown to us, in what are especially challenging times for so many.

“We would like to thank everyone who has reached out to us and have kept our hopes up and our spirits high.

“We will remember Billy’s life with a smile and miss his gentle ways, smiling face and auburn hair. His death has left a huge hole in our family.”

It follows an appeal made in August about the type of clothes Billy was last seen wearing.

The clothes that Billy Henham, inset, was last seen wearing before he was found dead in North Street, Brighton

Four people – a 17-year-old boy; and three men aged 19, 26 and 27 remain under investigation after being arrested on suspicion of Billy’s murder.

Detective Superintendent Alex Geldart, who is leading the investigation, said: “Our thoughts are with Bill’s family at the anniversary of such a tragic and senseless loss of life.

“We are actively pursuing several lines of enquiry and ask that anyone who has any information comes forward to police.

The scene in North Street, Brighton, after Billy Henham’s body was found

Anyone with information should call 101 or report it to Sussex Police online and quote Operation Gatling.