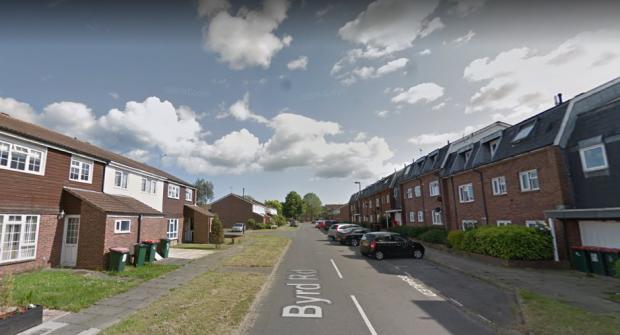 A 12-YEAR-OLD was thought to be dead when he collapsed in the street after drinking from a can which is believed to have contained bleach.

Ronnie Phillips was rushed to hospital and had to be put in an induced coma after the early hours incident in Byrd Road, Crawley, on Friday.

He had crept out of the house with his 11-year-old brother while their mum was sleeping and met up with a group of children.

At one point he drank from a can of fizzy drink, which his grandmother Tracey Willmor believes contained bleach, and collapsed shortly afterwards.

Ronnie told her that the last thing he remembers hearing was children laughing and running away.

But his brother stayed by his side and was able to raise the alarm, with police and paramedics soon arriving to take young Ronnie to hospital.

Mrs Willmor told The Argus: “I got a phone call at one in the morning telling me what had happened.

“It was just awful, we went straight to the hospital. A machine was doing his breathing for him.

“His brother is quite traumatised as well. He was with him, screaming at the top of his voice, ‘help me, my brother is dead’.

“A woman came down and put Ronnie in the recovery position, then called the ambulance.”

Ronnie, who has Asperger’s Syndrome, has since regained consciousness and is now recovering at home.

Mrs Willmor said: “He was taken to hospital in London and, because of Covid, only one person could see him.

“When my daughter phoned to say he had woken up, it was an incredible relief.”

But his grandmother says he told her he “can’t understand why no one likes him and why anyone would do this to him”.

Shortly after the incident, she set up a GoFundMe page with a target of raising £50 to “show him that people do care and are not all nasty”.

“I thought friends and family would just put a couple of quid in,” she said.

“I never expected the response we got.”

Supporters from as far afield as Australia have sent messages of support to Ronnie, with more than £1,300 being donated in just three days.

When asked by his mum what he might spend the money on, the 12-year-old told her he would like it to be put towards a holiday for the family.

An investigation into the shocking incident is currently underway, with Sussex Police currently waiting on test results to confirm what it was that caused Ronnie to collapse.

A force spokeswoman said: “Police are investigating after a boy fell seriously ill in Crawley in the early hours of Friday morning.

“Officers attended Byrd Road shortly before 12.30am after concerns were raised for the welfare of a 12-year-old boy who had collapsed.

“The boy was taken to hospital in a serious condition.

“He remains in hospital in a stable condition.

“Enquiries are ongoing to establish the full circumstances of what happened, and to identify if any offences have been committed.

“Police are currently awaiting the results of tests to determine what may have caused the boy to collapse.

“Anyone with any information is asked to contact police online or by calling 101 quoting serial 23 of 09/10.”