Ranked as one of the poorer areas in Britain, Moulsecoomb and Bevendean is rich in something currently more valuable than money – community and cooperation.

Although geographically close to the allure of Brighton’s shopping, socialising and soaring new developments, this neighbourhood’s increasingly deprived long looping roads can seem like a world away. A decade of austerity and decline has prompted residents, a population of almost 20,000 people, to look at how they could work together. One shining example of this is The Bevy, a once failed (and legendarily boisterous) pub which was taken on by 800 locals.

“We’ve really proved the worth of a community resource,” Iain Chambers tells me. “It might seem foolish when the books look a bit rough. You think: ‘Is this best way to go about it?’ Some people say: ‘You must be viable… You must be profitable and sustainable…’ But, in this emergency, the new currency is trust.” The Bevy stands as the UK’s only community pub on a housing estate, most others being rural concerns. Chambers similarly stands alone as the only Community Project Manager amongst all those co-ops. Its attitude of being ‘More Than A Pub’ has meant responses to Coronavirus and accompanying problems have been swift and decisive. Like local churches, schools and clubs, they’ve impactfully thrown themselves at emerging issues. “Part of that was because we know each other. That’s what’s vital now, and it’s what everyone else is learning – If I know my neighbours, then I’m safer.”

Reopened in 2014, The Bevy is owned by its members, with profits invested in the area. Welcoming and inclusive, it’s offered a place where everyone can come together, whether it’s for art sessions, community lunches or family events. While the building has, for now, closed its doors to the public, the organisation’s work goes on. They’re distributing food to many locals who used to visit the pub for social lunches. “They were kind of dependent on those lunches, and not regularly making food for themselves.”

Some of these people will be in a ‘cared-for’ situation, but many of them live alone. Obviously, this is currently a concern. “They might not leave the house. They might not have somebody who is going to bring stuff to them, so we had to create this very safe system for getting stuff to them without getting corona in the house.” The Bevy is employing even stricter controls in their kitchen now.

Chambers says it’s not difficult for a well-run kitchen to extend normal hygiene protocols into being ultra-safe. Current distancing policies have provided a reflection on how we’ve all been evolving as a society. The Bevy, like a lot of organisations in Brighton & Hove, had already been trying to confront the issue of isolation. In an increasingly digital age, they’ve run services where people can learn how to interact with technology.

“Unfortunately, the funding has not been extended. The people who professionally do this have been let go. Now they’re massively in demand, but they’ve gone on to do other things.” He thinks there may be a re-evaluation of how many communities and public services are funded after the pandemic subsides. When support is removed, it’s inevitable things will collapse under pressure. Then, it’s generally the most vulnerable who suffer the most. 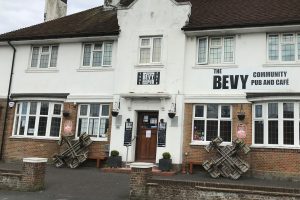 “We’d be in a different situation now, if we’d not been undermined. As well as the NHS and the Police, we underinvested in bringing people into the new digital world. So, it’s a huge problem for a small number of people who are most in peril. I know, across the country, we’re trying to get those last few engaged so they don’t become depressed and very lonely over the next few months.”

Established to serve people over profits, community pubs and shops have proved immensely resourceful and able to move very quickly. Because they’re attuned to what a neighbourhood needs, Chambers thinks there will be more desire to invest in projects like these. It feeds into something which sits at the core of humanity – a welcome sense of security when the people around you are looking out for you. Reaching out to locals, linking people together and bringing in new partners, The Bevy has built up a place where nobody needs to be lonely, and people believe in it. And the support goes both ways. “In an awful way, that we never would have wanted to happen, it’s been proven that this is a good model. This is a good way of doing things, because you can really focus on the needs of the community. You didn’t need to knock on people’s doors and ask them what they wanted. Because we’d already done that.”

Although The Bevy is temporarily closed, its vital work goes on. If you’d like to contribute towards their efforts, visit: www.thebevy.co.uk/donate

RECAP: Southampton 1-1 Brighton and Hove Albion – As it happened

Person hit by train between Lewes and Brighton