Brighton beach was absolutely heaving with people this weekend, and not just locals, out-of-towners poured through the station in their thousands!

Not only did that make the beach look like and feel like a walrus’ breeding ground, it also meant that about as much waste was left behind too. The selfless and (frankly heroic) staff at Brighton and Hove council removed a colossal 31 tonnes of rubbish from the beach and seafront. For context that’s the combined weight of: the Liberty Bell, a pair of Right Whale testicles, four 1971 Volkswagen Beetles, 10 Award-Winning Pumpkins.. and 14 Walruses. 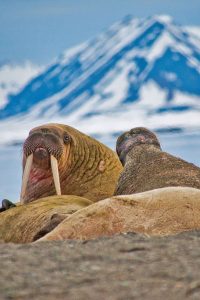 It’s also a record! The previous record for seafront rubbish in one single day was 11 tonnes on 25 June last year – this weekend we smashed it with 13.6 tonnes of rubbish littered on Saturday and 12.5 tonnes on Sunday (with a further 5 tonnes accumulating overnight to be collected Monday).

I have to stress: Those figures do not include waste that was properly disposed of – it was LITTER that was left beside the 500 bins along the seafront or just y’know, on the beach.

The Council are obviously pretty upset about the whole ordeal – Phélim Mac Cafferty has said: “I’m astonished and quite frankly furious at the people that create this kind of mess on our beautiful beach and seafront. They couldn’t care less about the effect they’re having, or the environmental damage they’re creating”.

Couldn’t agree more – is it too much to ask that we leave a place as nice as we found it? To hold on to the stuff bought with us for just a little longer until we find a bin with room in it?

Some of us evidently aren’t capable of that, so the council have taken extra steps to combat littering: more patrols of environmental enforcement officers who can give out advice, and £150 fines, to people not disposing of their litter correctly. And for those more cunning and alert litterers, who wait for officers to leave before committing their littering: CCTV has been installed all along the seafront because collectively humans can’t be trusted to lie down in the sun and do nothing without being anti-social trash-monkeys.

There will be a beach clean on the 15th August: meeting at the Angel Statue at 9.30am, here’s the link to the Facebook event: SurfersAgainstSewage

Well you made it this far, you obviously care about beach life, so here’s a treat for you: Some beautiful, quiet, clean, beaches to go to in Sussex that are just a train ride away!