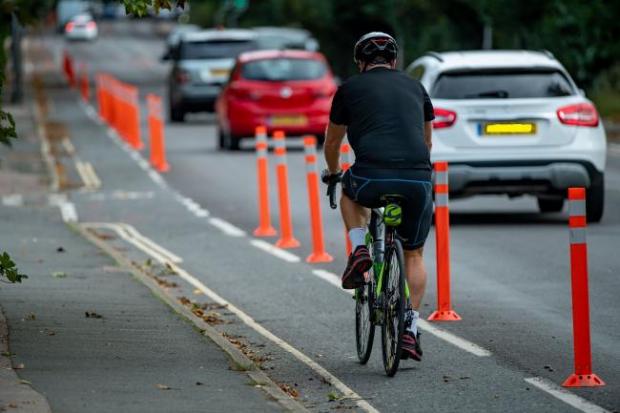 WORK has started on cycle lanes which are set to be scrapped within weeks.

West Sussex County Council has confirmed that work is being carried out on temporary cycle lanes despite their imminent removal.

The safety work in Upper Shoreham Road was due to take place before the announcement of the removal, but this was delayed due to bad weather.

READ MORE: Shoreham and Worthing among Sussex cycle lanes to be removed

Almost 20km of the government-funded cycleways will be deconstructed in Crawley, East Grinstead, Horsham, Shoreham and Worthing after receiving negative feedback from road-users.

A spokesman said: “Even though a decision has been made to remove the temporary cycleway, this decision is still subject to the council’s usual call-in period, and the availability of our contractors, so removal will not take place for a number of weeks.  Safety is always our top priority, so it’s important these works still go ahead.

“The current work on the Government-funded, temporary cycleway in Shoreham had already been identified as necessary from a safety perspective, but was delayed due to poor weather.”

West Sussex County Council launched a consultation on the future of the lanes and, last month, encouraged people to use them if they wanted them to stay.

But, this week, the council announced all lanes in Crawley, East Grinstead, Horsham, Shoreham and Worthing will be removed after the results of the consultation were overwhelmingly negative.

A council spokesman said: “The impact of the schemes has been monitored during their operation.

“Feedback showed the majority of responses were opposed to the cycleways, citing increased congestion as a key issue.

These are the exact stretches of each road which the cycle lanes will be removed from:

This stretch starts at St Richard’s Hospital in Spitalfield Lane and ends at Southgate.

Lane one of the dual carriageway was reallocated to provide lightly segregated cycle lanes in each direction.

This stretch starts at Babsham Lane in Bognor and ends on the A27 Chichester Bypass.

This stretch starts on the A27 at the Grove Lodge Roundabout, and ends at Union Place.

Lane one of the dual carriageway was reallocated to provide lightly segregated cycle lanes in each direction.

The first stretch starts at Three Bridges Station and ends at the crossing north of Bycroft Way.

The second stretch is between Balcombe Road and Southgate Avenue.

This starts on the A283 and ends at the Holmbush roundabout.

It involved a “light segregation using traffic delineator posts will be provided on Upper Shoreham Road”.

This starts on the B2237 Worthing Road and end at Madeira Avenue.

One lane of the road was reallocated to become a cycle lane on the north/eastbound carriageway.

This stretch started at the county boundary with Surrey and ended at Maypole Road.