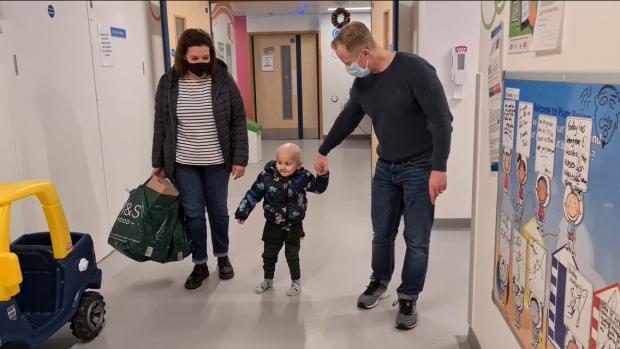 A LITTLE BOY who has been in hospital for half the year having treatment for cancer has made it home in time for Christmas.

Louis Knight from Worthing has been at Southampton Children’s Hospital since July after he was diagnosed with Burkitt Lymphoma, a cancer which can be rapidly fatal if left untreated.

The three-year-old’s family said their “greatest wish” was to have Louis home at Christmas, but it was “touch and go” as to whether he would be able to join his dad Chris, his mum Nicki and big sister Isabelle, due to side effects from his chemotherapy treatment.

SEE ALSO: Family fears son in hospital will not be home for Christmas

However, the Knight family received the good news “out of the blue” on Wednesday afternoon.

Louis’s dad Chris said: “My wife phoned and was a bit teary. She said the hospital had told her we could collect Louis and bring him home.

“Everyone was quite emotional after he came out  – and not just for a day release, but properly out of hospital.

Since Louis’s diagnosis, Chris and his wife Nicki have been taking it in turns to visit him and stay for a week at a time in hospital with their son.

Due to Covid-19 restrictions, Louis’s six-year-old sister Isabelle was unable to visit him in hospital and has only seen her little brother three times since his admission.

Chris said it had been “heart-melting” to watch them together when they were able to reunite.

Louis reunited with his sister Isabelle

“I think it’s going to take us the whole of Christmas just to open the presents – there has been a lot of generosity from people this year.

“We are bound to have a lot of Zoom calls today.”

Louis’s family hope he will now make a full recovery. They were advised his chemotherapy should be stopped as further rounds could put his life at risk.

Chris said: “The hope is that he has not been over-treated. Louis was initially meant to have seven rounds of chemotherapy, but he ended up in intensive care.

Louis at home with his sister Isabelle

“We’ve got 11 months where he is most at risk of a relapse. After that when you hit two years, the chances of survival increase to above 90 per cent.

“It’s definitely going to be a period of adjustment.”

Signs of Louis’s illness first emerged six months ago when he began to rub his eye and complain of pain.

He was referred to Worthing Hospital for a scan, which revealed a mass behind his eye.

Louis after he went into hospital

The next day Louis was transferred to Southampton Children’s Hospital, where doctors confirmed he had a fast-growing tumour the size of an apricot at the top of his nose.

The little boy recently received the Star Award for courage from Cancer Research UK, after months of difficult, painful treatment.

Chris said it had been hard for his son, who has just turned three, “to understand why people kept prodding and poking him and giving him medicine that makes him sick”, and there had been some “very scary moments”.

“Life has been tough for everyone this year, whether you’ve had a death in the family, or lost your job.

“We’re not even in the worst position. Everyone’s story on Louis’s ward is different – I’ve bumped into parents whose kids are 12 weeks old and have a 20 per cent chance of survival. It’s awful.

“Being there really puts things in perspective.”